}}Yue is the eighteen-year-old daughter of Chief Arnook and princess of the Northern Aqua Tribe. Due to an illness at birth, she was saved by the Photonic Super-Computer known as LUNA, and as a result became linked with her systems. This enabled her to understand Lost Tech as well as to translate and figure out how they work. It is on this, she discovers Riley Grant, an outsider with augmented superhuman capabilities, and with him seek out the mysteries of the Lost World Eden.

Yue was born with an unknown illness; as an infant, she was still and quiet, as though asleep, and her parents feared she would die. As her condition was critical and the tribe's healers – including Yugoda – could not cure her, Arnook prayed to the Moon Spirit (the Photonic Super-Computer LUNA) in desperation and placed her in the tribe's Spirit Oasis (unaware that it was the entrance to LUNA's inner workings). LUNA gently took the still baby within her compound, her parents hopeless to watch, and said to come back during the full moon the next night. The next night, Arnook and his wife saw mechanical tendrils extend out, gently carrying in their arms their baby daughter, alive and moving. Apparently, LUNA had gifted her with part of the purification nanites to not only saving her life but also turned her hair white as a side effect, though in effect, this also connected to her to LUNA via a bio-nanite link. Thus, her parents named her Yue, for the moon.

Though her link with LUNA would be known to her through dreams, swimming and being submerged deep in the water, seeing the various water-purifying machines and LUNA herself, urging her to find the Lost Tech, save it, and to aid the ones that would be sent to help.  Every night, she would wake up in a cold sweat afterwards, and began to further study on the mythical but real Lost Tech.  One day, whilst secretly looking through the Black Market, she came across fragments of Lost Tech, and discovered by touching it, she analyzed and understood what it was and how it worked.  It was then she realized the dreams she had were telling her the connection she and the Moon Spirit, now known to her as LUNA, gave her more than just a healthy body, it gave her abilities to learn and master Lost Tech.

Her hope and beliefs of Lost Tech dismayed not only the council, but her father, who would not approve of his daughter's behavior and personality, constantly trying to change her to be more like her favored older brother. Sometimes Claudus would openly show his favoritism towards Tohka over Yue, but nevertheless he loved both his children and hoped one day she would be ready to lead her people. Her relationship with Tohka was unsteady during their childhood, due to Tohka's competitive streak and favoritism by the people of the Northern Tribe, especially after an experience that occured within the Forbidden ruins, in which Tohka would push Yue into a pit, but Tohka instantly regretted it and went to find help, only for them to come back and see she got out (unaware that she had found a Lost Tech pathway to get out). Over the years, she grew to love Tohka and both siblings would look out for one another. They were both even trained at an early age by Northern Tribe Generals Tanuk and Yakone.

As Yue grew older to the age of eighteen, she would often visit the slums of the Northern Tribe in secret to obtain old artifacts of so called Lost Tech, she was often disgusted by the mistreatment of others living in the slums.  One day, she came across the perfect Lost Tech piece, and immediately brought it over to her home to prepare for a meeting with the council, not knowing of the plans that would come to fruition on her.

The next day, to her father, brother, and the council, Yue showed that she was on the verge of a discovery that could permanently shift the balance of power between her nation and the warring nations against the Inferno Empire. But her research was sabotaged by a spy from the Dark Nation, called Thern. Thern knew of Yue's work, and that it could bring peace and prosperity back to the Seven Nations. At the same time the Dark Nation's conspired with the Emperor of the Inferno Empire, Ozai, to kidnap and corrupt her, thus corrupting LUNA in the process, and conquer Lost World Eden. The unwilling Princess, disguised as a soldier, escaped in a Northern Tribe ship.

Her journey aboard this ship would take her to the Southern Tribe, where her ship would be taken and raided by Inferno Empire soldiers. Though only with little luck of escaping and near death, she was saved by a mysterious stranger named Riley Grant, showing superhuman abilities unlike any other. It was with him that she would find the key to the mystery of Lost Tech, the Super-Computers that ran them, and why Riley and his people were brought to this world in the first place, as well as learning the secret of the Lost World Eden.

Yue is kind, sweet, and gentle. She had a deep sense of loyalty and duty to her tribe. She also dislikes cruelty towards people as shown with her disgust over the Inferno Emperor, who abused his own son for his own benefit. She offers hope to others, and was courageous enough to sacrifice her own life to save Riley when Zhiao fatally wounded him.

She is the only one of her people at the beginning to believe that technology and HADES exists. She has a sort of resentment of her people's traditions involving the males choosing who they wish to marry or the fact that nobody believes that ATHENA is a remnant of Lost Tech, wanting a chance to prove herself just as worthy of being succeeding her father as everyone else believed Hahn to be. Her beliefs, however, put her at odds with her father who had a very different ideology concerning how to lead the Aqua Tribes.

Along with her compassion, however, Yue also hid a great deal of guilt over being openly affectionate toward Riley while engaged to Hahn. At times due to this, she is a princess first hand and a girl second; she is bound by the traditions and laws of her people. But that doesn't mean she can delay them long enough.

Because of this, she has a sort of rebellious streak. This is shown when she ran away from the Northern Tribe in order to avoid this marriage, even going so far to getting caught by the Inferno Empire.

Yue initially looked down upon her past liberators, but in due time came to accept them despite many of their glaring flaws and quirks. She has come to trust Riley very much, as she trusts his natural leadership and unusual wisdom, and therefore allows him a great degree of autonomy as the leader of the group in the field. She works well with Riley in their field work together, often correcting him when he acts as a warrior when she needs him to be a diplomat, however when revealed the Ancients were responsible for killing the World the first time, as well as the Creation of HADES, she lost trust, completely justified as the technology from back then was what drove the world in its present condition, although she did learn that not every race, technology, or person is entirely good/evil.

Being a Princess of the Northern Tribe, Yue is known for her commanding attitude towards not just her people but the Grant Group, her serious demeanor, and occasionally playful personality. She does, however, have a deep-seated bitterness: The Inferno Empire is the focal point of Yue's rage and suffering because of their brutality and starting the 800 Year War. Yue's raw hatred of the Inferno Empire is unnerving to behold for those more familiar with her more compassionate side, and her bloody history with this war has fostered in her a severe hatred and distrust of their people, including the crown prince and princess, Zukai and Azula. This comes to the forefront upon Riley stopping her from killing them needlessly, believing he’s siding with them. She becomes severely conflicted and begins coldly shunning him. However, in due time, Yue realizes that Riley has more than proven his good heart and rightful place on the team, which Yue considers to be her new-found family, and she reaffirms her trust in him by apologizing for her misjudgment.

Yue is a very caring and altruistic individual who wants to do right by her people, the other nations, and is incredibly committed to her diplomatic and military duties as the daughter of the Northern chief, and appears to define her mission by the same standards and care that her father did.

After being saved by ATHENA from an unknown illness, Yue developed her own abilities, though not as physical as Riley's, she is physically able to keep up with him, but mentally, she has been enhanced. 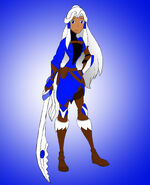 Swimsuit and Without Jacket or Upper Armor 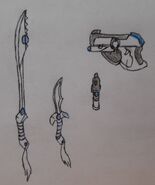 Retrieved from "https://the-lost-world-cage-of-eden.fandom.com/wiki/Yue?oldid=4690"
Community content is available under CC-BY-SA unless otherwise noted.