Shiro Mariya is a Japanese exchange student to accompany Riley Grant and his class on their senior vacation trip after graduation. He is highly intelligent and has been the school prodigy since elementary school.  Once remade in the Lost World Eden, he becomes an Engineer in Riley's Group, and later on the Guardians, though it has made him quite formidable as a fighter as well.

Before his transformation, Shiro was a guy of short stature, shorter than Riley, but just as skinny as him. He was usually seen with neat black hair kept together by combing it. He has small grayish green eyes and had large square glasses with the white brim on most of the time. Due to moving into the US, he still wears a male school uniform from japan with white sneakers and dark blue trousers. Though he kept his jacket closed most of the time so the white shirt underneath couldn’t be seen.

After his big trip to The Lost World Eden, his physical being has enhanced greatly. He's at a height of 5'7"- 6 feet, his body frame has been enhanced to a small muscle build, although tight and compact, it still shows itself in his arms, chest, legs, tight butt, and six pack abs, as well as enhanced down below the waist belt (something he finds physically impossible with his DNA chain). His hair is still combed but possesses an unkempt spikey ends, but on the back and sides, his hair has gained yellow streaks; a small line going from sides to back. He also no longer needs his glasses, as he can see perfectly now.

Shiro is the only son to a mother and father, as well as four sisters, two older than him, one his own age and another younger than him, making him the first middle child. He is well known throughout his school as the schools prodigy, being the top student of the school for a total of 9 years. He has always been on the top of his class since elementary school and been considered the schools prodigy since he enrolled. He started learning programming in his first year at school. During his time at school, he was always alone yet never thought badly of it considering he didn't feel the need to be with someone that wasn't as smart as him and how much easier things would have been to be done when alone. However, during his time at school he did doubt if he should let himself live like that and whenever he saw Riley and his friends, he would always think how that kind of lifestyle might not be so bad if he could redo his life.

When Shiro lost his mother, who was very important to him, he attended her funeral and can due that relate to Kay in a way that Shiro has both experienced a lot of torment, grief and pain from losing someone close to them.

It was later on at a library break did he and Riley become friends, both with a love of knowledge and reading. Somehow he also got tangled in with Riley, Newt, Toby, and Anna during times Toby talked them into having an adventure. They had remained friends to the point of Graduation. It was also at the airport before they boarded the plane that he asked Riley what he wanted to do with his life, after Toby stated that Riley needed adventure in his life before life got taken from him (something Riley’s uncle also stated to him). Before an answer could be said, a solar flare storm erupted, nearly knocking out all electronics, and then suddenly a bright light same, as everything went black.

Shiro then awoke in a cave in a winter landscape, confused and alone in the cave. But also, he had discovered his body had been altered to be taller and stronger…. And unfortunately naked, much to his embarrassment. Going against better judgment, he wandered outside, trying to find someone, even calling out, never realizing there were predators out there. Though fortunately, Riley had shown up, just as augmented and as nude as he was, but showed what he was physically capable of, as he killed a Chimeric creature with one blow to the head. After going back to Shiro’s cave, cooking and skinning the animal, the two were in discussion on what had happened, until they discovered the cave they were in wasn’t a cave. It was a 900,000 thousand year ruin of what was once some sort of library/lab. It was in the library that they found, lying in the center of a room on the second floor, was their school nurse, Onna Kenderson. Though they saw she had been regressed to a 22 year old beautiful woman… who was naked with amazing knockers. After an embarrassment moment of their awkwardness and nudity, they managed to get above, but not without Riley discovering a strange little dorito-sized device. Once dressed the best they could, they had bumped into a village man named Bato… as well as being attacked by what he called the Black Iron Demon. It knocked both Shiro and Riley away, whilst it took Bato and Onna to a remote location not far from the spot.

Later, Shiro awoke along with Riley, both fully clothed and helped by Siku and his sister Nayan, pupils of Bato, who were worried about the latter. Though he and Riley were shunned by a few of the Elders of what they discovered to be called the Southern Aqua Tribe; they were outcasts to the people as they had been discovered in the Forbidden Area. The Elder, Tressa, seemed rather helpful to the boys, as Nayan seemed to gain hope from them both, and after they all heard it was Riley who killed the Owl Bear Man-Eater. Though the elder, Lessna, was still distrustful, as were others. Though Shiro encouraged the siblings to help Riley when he was going out to find Bato and Onna. Afterwards, with many discoveries going on, Shiro joined Riley on the quest to discover the secrets of the Lost World Eden, including the Lost Tech, to stop a war that had been going on for nearly 1,000 years, as well as the mystery of why they were brought there in the first place. As such, Shiro became one of a few Engineers, but as the first one, in the Grant Group and later named Guardians.

Recognized as the prodigy of his school, Shiro is highly intelligent with a vast knowledge on prehistoric creatures and a lot more, which makes him an invaluable asset to his friends and comrades. Shiro is very mature and keeps a cool-head in intense situations but even his patience has limits in regards to someone's foolishness or stupidity. Still, he is a good person at heart and will use any information he has at his disposal to help his friends when they're in danger. Shiro shares a special friendship with Riley, as they both are classmates and roommates before the journey to the Dragon's Tail.

Considering himself a scientist, Shiro believes in cold hard facts and is slow to believe in anything he considers to be nonsense, but he still has some doubt and, to a degree, can be open-minded as he originally disbelieved in the clairvoyant visions of Mami Kagura. He also finds it bizarre that a creature like the Indominus Rex could even exist, since there was no record of such a creature even logged at all.

But he soon comes to have doubts and consider perhaps Mami does have premonitions of sorts, as well as there might be something more going on with the Indominus's existence. He has leadership skills of his own and can be considered the second-in-command of their group right after Riley. It is remarked that despite Shiro always having a cool attitude, he has strong emotions for his friends where he feels a horrible feeling upon seeing his comrades death throughout their time on the island and is even willing to put himself in danger to save them. As an Engineer for the Group, he is dedicated when it really matters and very supportive. 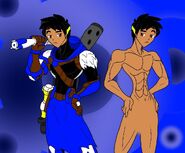 Swimsuit and Without Armor 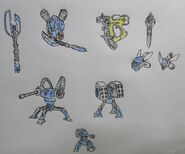 Weaponry and Cam-Bot
Add a photo to this gallery

Retrieved from "https://the-lost-world-cage-of-eden.fandom.com/wiki/Shiro_Mariya?oldid=4686"
Community content is available under CC-BY-SA unless otherwise noted.