Riley Grant is the son of Dr. Alan Grant, and a Paleontologist himself, though not as good as his dad.  He awakens one day in the world known as the Lost World Eden.  Now learning to survive and to fight, he becomes the main protagonist of the story, a warrior, and leader of the Grant Group .

Before his trip to the Lost World, Riley was a rather short and frail eighteen year old Caucasian. He had a slim figure as well as short for his height, a scrawny build to say the least. He had brown hair that was neatly combed to the left, with only a few bangs sticking over his forehead, and brown eyes, to which he wore glasses. His usual attire was a white button up T-shirt with a black vest, and blue jeans, along with black and white shoes. He also had a watch on his left hand, and also had a black backpack on him at all times.

After his big trip to The Lost World Eden, his physical being has enhanced greatly. He's at a height of 5'7"- 6 feet, his body frame has been enhanced to a small muscle build, although tight and compact, it still shows itself in his arms, chest, legs, tight butt, and six pack abs, as well as enhanced down below the waist belt (something he's embarrassed about). His hair is spikey, sticking up like a fiery wave but retains his front bangs. He also no longer needs his glasses, as he can see perfectly now.

Riley Grant is the son of Dr. Alan Grant, and a Paleontologist himself, though not as good as his dad.  His mother died while giving birth to him, so he was raised by his father. When he was seven, his father died in a plane crash over the Atlantic returning from Iceland on a discovery that later on would play a part for Riley to discover. He moved in with his survival experienced uncle, Bart Alan, who was something of an outdoorsman, teaching Riley all he would need to know about survival. Unfortunately, his sickly frame didn't make things easy for the young man. He grew up in Aspen, Colorado, both in town and in the forest, where his uncle continued to teach him, though Riley still didn't figure it would come in handy at all.

He attended Snowside Highschool when he was eighteen, and nearing graduation. During his time, he had made frients with Michael Corven, Zeke Sanches, and a foreign-exchange student, Shirou Mariya. He had also met and befriended a local nerd girl, Anna Albright, whose father was an archeologist and paleontologist like his father. The two got along pretty well, and almost had their first kiss merely to experiment... though they were both ten and backed out, thinking it was gross. But it gave birth to a crush on both parties that would soon follow through the years.

After graduation, the group were heading out to Hawaii as a final school field trip to celebrate their graduation. Before he left, his Uncle Bart told him to try and live his life; the world was never in books, the world was out there, waiting for him to seize the moment or the day. Looking over at Anna, he was about to do so at that moment.

However, a strange storm suddenly blackened the skies, and lightning shot all around like crazy. Whirlwinds blew almost half the airport, causing destruction in whatever way. And then suddenly, the roofs above him, his class, and several passengers coming in and out of there. And then a bright light was shined above them, blinding everything. Then finally, everything went black.

fter a while, Riley finally woke up, though not at the airport. As he got up, he looked around seeing he had been taken to some strange forest jungle of sorts. And from the looks of it, deep in the mountainous region of an unknown site to him. Wandering around, he came to a lake to which to get some water, and saw himself. And yet, it wasn't him; it was a taller, stronger, and better looking version of himself. And to make it more awkward... he was naked. Trying to figure out what had happened to himself, he needed to find answers, but for the moment, he needed food and shelter, as well as something to wear.

Luckily, his uncle's survival training had come in handy, and with his newfound strength, speed, agility, and health, he could do it. Though, he wasn't expecting him to be strong enough to leap high in the air, let alone kill a strange Bear-like creature with one blow. Though now with a fur skin cloak, he ventured further downward, stumbling into a local village of humans, of which were a bit perplexed by him. But luckily, he was befriended by them, and given clothes as well as an explanation on where he was, as he was in the Savage East; a section of the mountains which had water and had long winters lasting six months. It was part of the world known as Eden, to which Riley commented it was a Lost World to him.

Later on, he meets a girl named Yue after her ship was attacked by the Fire Empire; an empire surging to conquer all of the Lost World by using what Yue had been studying called the Lost Technology. Afterwards, Riley finds and meets up with Shirou, who had also changed, as well as a flight stewardess named Onna Markinson with some medical skills of her own. Later on, the group pushes forward to learn of this Lost World Eden, how to get home, and most importantly, why they were brought there in the first place.

Prior to the story, Riley is a smart but rogue-like character that attracted a significant amount of anger and distaste from his female colleagues, often portrayed comically. He has an uplifting spirit and charisma which was the reason behind his ability to attract friends to stay with him, the majority of time. Riley is generally bright, and scores high grades at schools, claiming that he just studies and tests well.  After his augmentation, he becomes rather athletic.

Riley is an unusually brash, daring character who acts before he thinks. He has a resolute and determined personality which always places his friends’ priority over himself and attempts to to save anyone close to him, regardless of the situation. Due to his compassionate personality, he draws other survivors close to him, despite most initial negative impressions. He has shown taking earnest actions towards saving and helping Anna Albright and Kouhei Arita respectively, due to their relationship prior into being stranded in The Lost World Eden. Riley has an unusually forgiving attitude, which has been shown through various disputes, such as the jealousy of Shuu Hikime, where despite Shaun attempting to kill Riley, Riley kept the predicament silent and allowed Shaun to remain without any consequences, except he warns Shuu that if he hurts Anna, or tries it again, he’ll leave him behind.

Riley's honest with himself, considering he openly admits he relies on Shiro Mariya stating without him, he would have died. He's not afraid to try and save everyone, including people that would consider him as an enemy. Throughout the story, whenever Riley has a plan despite the danger, he would always put himself in the front of the danger.

Riley places a lot of trust in his friends, continuing to believe in them and willing to risk his life for this belief. His attitude usually rubs off on other characters, creating a bond between him and everyone else. Just as Riley trusts everyone, a high majority of his friends trust him, too. Riley unknowingly has gain the affection of many girls while in The Lost World, due to his brave and daring personality like Yue, Anna, Lex, Maya, Toph, and even Azula.

Lost World Eden and past Appearance

Swimwear and No Jacket 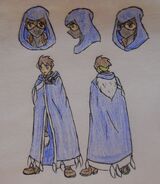 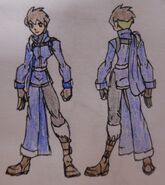 Retrieved from "https://the-lost-world-cage-of-eden.fandom.com/wiki/Riley_Grant?oldid=4691"
Community content is available under CC-BY-SA unless otherwise noted.