Claire Rodriguez is one of Anna's friends from Snow Ski High School and is a fellow graduate. Taken and Augmented in The Lost World Eden, she is one of the few girls that actually keeps it together alongside Anna. Fierce, fun-loving, and strong, she becomes a strong member and a Heavy Weapon user, despite her small build, in the Kioshi Group, and later on the Grant Group/Guardians.

Before her transformation, Claire was a very pretty eighteen year old girl, despite not being mature looking. She was slim with dark brown eyes and black hair with a blue streak and a lot of colorful barrettes in it. Her body was slim but not slender, and still retained an A Cup chest. She wore a light purple turtleneck shirt with a darker pink skull and the word "Rockettes" under a short dark purple jacket, a short blue skirt and gray leggings with black shoes.

After her transformation, Claire's body gets a major makeover. Her legs become long and powerful, butt tight and firm. Her small muscles were shown more as her arms seemed a bit beefy but remained feminine. Her hair grew to upper back length, to which she ties up in a ponytail, and draped on her left shoulder. Though the biggest change was her E cup breasts; something of a bigger shock for her.

Claire Rodriguez was the only daughter of her parents, and the only older sibling of her baby brother, Enrique. When she was younger she had a stuffed bunny named Suzie, to which she gave to her little baby brother, bonding the two from her teenage years. During grade school, a young boy helped her find the missing class bunny, which she also named Suzie Snoozle, and gained a crush on him, to which the boy introduced himself as Jim Blake. During middle school, she met her two best friends, Darci Sottz and Mandy Wong, who became like sisters to one another, despite skin and racial differences. Later on, she had also befriended Anna Albright at the same time as well, after school jock, Steve Pachuk tried to hit on her when Riley Grant wasn’t nearby to help. The two bonded later on during their teen years, as both girls fell in love with their equal childhood friends, but didn’t feel they were pretty enough. As she grew older, she showed an interest in mechanics and engineering, to which she studied heads on in.

Her mother, who was an old-fashioned politician, wanted her to do more lady and classy things, as they might lead away into finding a boyfriend which would lead to a husband and she would become a mother. Though her father thought differently when she fixed his lawnmower and later on his truck, of which he encouraged her to utilize her gifts, saying that if someone doesn’t like you for who you are, then they never really cared about who you were instead of what people thought you were.

When she was eighteen, she, Anna, Mandy, and Darci all graduated along their class of Class 4-A. Later that day, Claire’s dad picked up the other three girls to take all four to the airport to start their Hawaiian graduation vacation. Once they got to the airport, she bumped into Jim once again… but sadly, she never told him how she felt (and neither did he, as he just froze up and let them pass by). Anna, seeing that, pulled Claire nearby and convinced her to try and confess to Jim before someone else did; though Claire turned the tables and said she would… but only if Anna told Riley how she felt as well.

The two looked over at the sitting/waiting area, seeing everyone was present there. There, they saw Riley and Jim, both talking to their friends, and to which both girls nodded, and walked over, attempting to tell the boy of their hearts what they felt to them. Unfortunately, neither one got close to confessing, for at that time, a Sunspot Storm erupted, causing all electrical equipment to short out and go crazy. The skies lit up with red and black, until a bright light lit up everything… and then everything went black.

Claire awoke again, finding herself in a darkened cave, and blind as there was barely any light. Fortunately, she wasn’t alone, as Anna, Darci, and Mandy were there along with her, as the four girls found a way out of the cave, and into the light. Once outside, they saw that they were no longer anywhere near Aspen, Colorado, or anywhere near America, as the area seemed more tropic and prehistoric. And if things weren’t bad before, the four girls realized that their bodies had been changed from scrawny and weak to strong and beautiful… and that they were naked.

Though ignoring their nudity, Anna made the decision to look for help and to see if they were alone, despite the physical changes and the state of dress. Claire was the second to follow, staying alongside her friend, with Darci and Mandy following after. Knowing an hour later there was no town, the girls almost gave up, until a Tyrannipede appeared and threatened to eat them, chasing the girls until they jumped down a waterfall to avoid such a fate. Unfortunately, even in the water, fate wasn’t kind, as a Viceopus nearly dragged them under, almost eating them, until Anna managed to free herself and stabbed the creature in the eye, releasing them all. Losing themselves to go further swimming and breaking surface, they found themselves in a deeper cavern underwater.

At the moment, the girls were arguing on what to do while Mandy wandered off in fear… only to fall down a slide shaft, with the three following her. Once down below, they discovered Honey Hager and Ethel Tomako, both naked and augmented, but all was put aside as Claire discovered an elevator built in the cavern. Deciding no better choice, they take it, and go down underwater, discovering that it led to an abandoned and ancient underwater sub-base, built around a giant coral reef tree, surrounded by a water mist, and bearing strange glowing blue fruit.

Once inside, the girls looked around to try and find something to communicate, but also something to wear. The communications were all shot or down… and all the clothing was tattered and unable to retain a strong thread, meaning it tore too well. Everything was all going downhill, especially on the food source. But Claire and Anna both didn’t give up, as both went to work; Claire with the mechanics, and Anna on gathering food. With much grease work and back breaking labor (mostly because Claire had no boots or clothes, and everything was slippery with grease), she managed to get the main power back on, allowing Anna to come back, while a new old friend, Sheryl Lonnigan, had rejoined them during Anna’s bountiful hunt on for food, and apparently material to make at least underwear/bathing suits for them all for Mandy to make as a start for clothing.

As two weeks passed, the girls had managed to form together a tight-nit team. But two weeks during that time, a slaver ship had come into the island, taking with it five extra women, of whom they brought to the island to break; strip down, clean off, and mind break for slavery. Luckily, the girls had stepped in, taking down the crew and slaying them with ease, releasing the girls. However, the ship was damaged thanks to a reaper Leviathan smashing onto shore, eating the remains of the slavers, and forcing all the girls, Kioshi Group and former slaves, to retreat underground into the Sub base. There, they befriended the slave girls, Suki, Akane, Sui, and Ting, thus adding more members to their group, which they had named the Kioshi Group.

Nearly a month had passed, and the girls had developed a society, with their new members and two of the only artificial members of the Sub Base, Peri the Vox A.I. and a Crane-lifter robot Claire refitted and repurposed, Octus. But soon then, the Grant Group arrived, and their greatest adventure would begin soon. Claire became one of the Heavy Fighters as well as one of the Engineers of the Grant Group/Guardians, helping to find out the mystery of the Lost World Eden and the bigger mystery on how they got there and why.

Claire was more of a popular girl in appearance, able to blend into the crowd though was noticed when she allowed it. Soon enough, Claire became suspicious and concerned about the Lost World Eden and why they were brought there in the first place, so she went to investigate what was going on.

When she found out about the Lost Tech, Claire started to prove to be a worthy ally and very insightful with weapons and the ancient and current cultures. She is also shown to have a motherly side, when she took care of a few orphan girls.

Claire is also shown to be quite irritable and impatient with others when they get too annoying, especially Riley, Mandy, and Tobias. It is also hinted that Claire might have a bit of a strained relationship with her mother.

In battle, Claire comes off as cool-headed and unafraid, sometimes smug and cheeky, and slightly sarcastic. Even in the middle of a serious mission, she still shows herself as a rather playful and whimsical character.

Swimsuit and Without Armor and Jacket 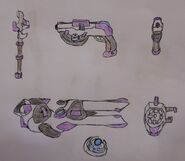 Awakened in the Lost World

Add a photo to this gallery

Retrieved from "https://the-lost-world-cage-of-eden.fandom.com/wiki/Claire_Rodriguez?oldid=4626"
Community content is available under CC-BY-SA unless otherwise noted.